In addition to translations for the liturgy, the red Missalettes available in every pew at Mater Dei explains many of the actions of the priests that are done differently from Masses said in the Ordinary Form.

For example, in the Extraordinary Form, the priest appears to be facing away from the congregation during Mass.

The priest is facing ‘Liturgical East’ with you. This is because of a long standing tradition heavily rooted in Scripture that tells us Christ will come again from the East. The Priest, as Alter Christus (another Christ), leads the people, all facing the same direction, in the supreme act of worship: the representation to the Father of the Sacrifice of the Son through the power of the Holy Spirit. The priest does not give us his back; instead he humbly offers sacrifice and stands before God on our behalf.

In the celebration of the Mass in the Extraordinary Form, the priest uses three tones of voice (low, medium, and high). The low voice is used, for example, during the prayers surrounding the Consecration and the Consecration itself, as the priest quietly prays the words of consecration, in which the bread and wine are transubstantiated into the Body, Blood, Soul and Divinity of Christ.

The medium voice is used by the priest at the altar to be heard the sacred ministers and servers who are near the altar and the high voice is employed to give the texts of the Mass that are heard by all.

It is, therefore, well to follow along in the hand missal so that one might meditate upon the prayers of the Mass. The silence experienced during the Canons of the Mass is a hushed awe in which the faithful render thanksgiving unto the Father for the mystery of Christ’s supreme sacrifice made present again on the altar.

When a newcomer attends the Mass in the Extraordinary Form for the first time, they are, moreover, surprised that the most important part of the Mass is accomplished in silence. Through the silence of Mass, we enter into a contemplative and sacred silence, over which the Holy Ghost is hovering. This anointed silence in the Traditional Latin Mass is a timeless silence pointing to eternity.

Next Topic: Receiving Communion on the tongue

More details about the meaning and symbolism of the different ceremonies of the Traditional Latin Mass can be found in the Explanation of the Prayers and Ceremonies of Holy Mass, taken from motes made at the conferences of Dom Prosper Guéranger, Abbot of Solesmes.

Portions of this page courtesy of SanctaMissa.org

Starting in June:
• The 8:30 am Mass on Sundays will be Low instead of Sung.
• There will be no Sung Vespers on Sundays. They will be recited and begin at 4:30 pm.
Both will resume in the Fall.

Mass and Confession Schedule from May 31st to June 5th


Wednesday 6/2
No Mass, no Confessions


All other Mass and Confession times are canceled on these dates.

The 8:30 am Mass on Sundays will be Low instead of Sung.
There will be no Sung Vespers on Sundays.

Both will resume in the Fall.

Mass and Confession Schedule from May 31st to June 5th

Wednesday 6/2
No Mass, no Confessions

All other Mass and Confession times are canceled on these dates.

There is no charge for this service,
but your carrier message and data
rates may apply (~6 msgs / month).
Reply STOP to 84576 to stop
txt notifications at any time.

Is this your first time to the Traditional Latin Mass?

You are not alone! All over the globe people are discovering the treasure that has been at the heart of the Catholic Liturgy since the first century. Do not feel out of place if you are not familiar with Latin (you will see most people reading a translation) or if the actions on the altar look different – this same Mass was known by Roman Catholics around the world for centuries!

Are you new to Mater Dei or to the North Texas area? The Welcome Team invites all visitors and parishioners new and old to come talk outside the entrance to the church on the last Sunday of each month. If you want to meet other parishioners and get more involved at Mater Dei or you have questions about the parish, the Latin Mass, or Catholicism, please stop by or contact the team at welcome@materdeiparish.com.

Tent set-up Outside
Thursday-Sunday Masses take place in tent, not in church

✠
NOTE: Fr. has determined that, after research, there are ancient liturgical options that Holy Mother Church allows to be utilized during Holy Week. The parish will be exercising these rites; there will be supplements provided for those portions that are not printed in your missal.

Parish Activities for the Month of St. Joseph

7:00 a.m. - Low Mass at Carmel, Church/Hall
Full Passion will be read
Some palms will be blessed at Carmel

Tent set-up Outside
Thursday-Sunday Masses take place in tent, not in church

The Diocese of Dallas has released a decree outlining the way in which its 77 churches will incrementally open to welcome back the 1.3 million Catholics in the 9 counties it serves. Taking into consideration the recent guidance of civil and health authorities, and with the unanimous support of the bishop’s priest leadership council, the Diocese of Dallas will begin the process of opening in phases, allowing for the ability to re-evaluate the process as necessary in order to ensure the health and safety of the community. This process will occur in four phases, with each phase building upon the last. Thank you to the members of the Mater Dei Photography Team who worked hard to capture images of the beauty of a traditional Holy Week and Easter at Mater Dei. Recitation of Public Rosary Effective Monday, February 25 the rosary will be recited publicly beginning 30 minutes before each weekday Mass, and also before the Sunday 7:00 a.m. Mass. There will not be public recitation of the rosary after Mass. Benediction Schedule Change Benediction on Saturday morning is CANCELLED except after the Vigil of the […] 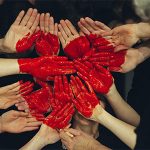 Mater Dei is forming a welcome team to strengthen the community by welcoming new parishioners and helping them get involved in parish life, as well as answering questions for newcomers and veteran parishioners. If you are interested in joining, please contact: welcome@materdeiparish.com.