As Catholics, we treasure the “most beautiful thing this side of Heaven” and our altar boys helps us to  preserve this sacred tradition. Their service to Mater Dei is a serious responsibility and the  community is very grateful for the sacrifices of their own time and talents. Altar boys in the Roman Catholic Church  were first regarded as belonging to the clergy, thus they had to learn Latin prayers, songs and had to  behave in a well manner and follow all the rules that were set on them. Many  became priests later in life.

It is a very great honor to be an altar boy at the Lord’s altar for any Mass. The altar boy helps the  priest in those things which he does at the altar during the Sacrifice of the Mass and other liturgical events. He also sets a good example to the whole congregation, since he is highly visible and able to help the people in  church to also be reverent. Many vocations to the priesthood have come from  young men serving the  priest at the altar. 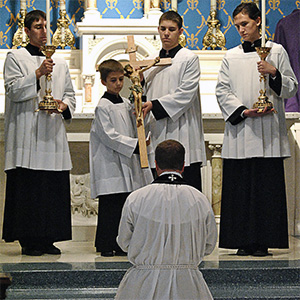 When serving the Tridentine Mass, one of the most important things that the server does is say the responses to the priest’s prayers in Latin. Very often, people in the congregation do not say anything at Mass using the older form of Mass, because there is an old tradition that the server alone was to make the responses for them. This means that the altar boy must be able and ready to speak out  clearly and accurately all the Latin responses that fall to him. You are the representatives of the  whole congregation right up close to the altar in the sanctuary.

A packet of information is available upon request for those interested in becoming an altar boy at Mater Dei. The packet will clarify their roles and responsibilities for serving at the Altar of our Lord. Included with this packet will be a current schedule, guidelines for serving the different positions at High Mass, Server Training information with the necessary Latin prayers and expectations for the behavior, dress and responsibilities of an altar boy.

Video 1:  This video contains the responses for Low Mass, Requiem Mass, and for Passiontide and the Easter Season.

Video 2: This Video focuses on the pronunciation of the Traditional Latin Mass responses

It is important that all Altar boys work on the pronunciation and the memorization of the Latin Mass responses in order to be approved to serve Low Masses and as Acolytes. We hope these links will assist you in your preparation.

Current and future altar boys would do well to remember the following:

All boys are required to be present for their assigned Mass unless they arrange in advance for their own replacement.

As the point of contact for the altar boys, my responsibilities include scheduling, coordination with the Master of Ceremonies and serving as the primary contact person for the boys and their parents.

Please feel free to contact me directly with any questions, issues or problems associated with the altar boys. I will coordinate resolutions with the Pastor as needed.

Thank you for supporting our altar boys and please do not hesitate to contact me if you have any questions or concerns.